Like many of you, my kids and I have played at Cedar Field Park next to Little Earth and Powderhorn Park. Although these parks serve the most diverse and low-income parts of our city, these parks have seen little improvement over the years. Slides have bullet holes, outdoor drinking fountains stay clogged all summer, sidewalks seem like they've survived an earthquake, chipping paint instead of bright colors is the norm, and outdated equipment goes months in a broken state as children incorporate the malfunction into their play.

So when the Minneapolis Parks & Recreation Board approached the City of Minneapolis to request a $15 million investment per year for the next 20 years, I've been standing up with our Ninth Ward residents to say - how will this funding improve ‪#‎RacialEquity‬ in our parks?

Today at 10:00 a.m. the City Council's Committee of the Whole will host a public hearing to hear from residents about the Park's funding request. I hope to see many of you here in the Council Chambers so we can hear your views about this matter.

Mayor Hodges has released a statement about her funding proposal as issues of "where will this money come from" and "what will it fund" become points of debate.

I am still very concerned that there has been little or no attention to how we must incorporate a racial equity funding mechanism into any future investments we make into our parks and street improvement funding plan.

In today's Committee of the Whole meeting I plan to elaborate on this #RacialEquity need and one I have consistently raised with our Mayor. It is not enough to hope that these future dollars will be spent in an intentional way to prioritize our most diverse and low-income areas. Addressing the parks that have been neglected and under-invested in over decades takes intentional and public commitment. It is extremely important that we as a City Council promote and advance a racial equity funding formula in any moneys we allocated towards improving our parks and streets. I've already written to the Park Superintendent Jayne Miller asking for a list of the neighborhood parks located within the city's Racially Concentrated Areas of Poverty, which is a designation by the MetCouncil, so we can begin to think about zeroing in on some priority parks.

Any process to fund the future of our parks and streets must fully engage and be guided by the community. Rushing into any plans to quickly inject moneys into our parks will only leave the people who have always been left out behind yet again.

A completely public, intentional and officially documented process to fund the future of our parks and streets through a racial equity lens is a key element to building a ‪#‎OneMinneapolis‬ - the city so many of us in elected office have promised we would build with and for you.

In other words, a racial equity funding formula must be "baked into the bones" of any funding mechanism the City of Minneapolis puts together for the future of parks and street improvements. Racial equity is no longer a question of "should we do it?" - it is a moral responsibility that demands we simply figure out how to do it.

Although this process might take a little longer time to craft a city ordinance funding the parks and our streets, it is necessary and our community should not accept any excuses for a delay or lack of racial equity language in any Council action we take on this issue.

I look forward to hearing from you on how we can help craft a funding package that will prioritize and uplift our city's parks and street improvement projects who have bore the brunt of multiple social vulnerabilities and historic dis-investment.

The time to deliver for #RacialEquity is now.

Check out this map of the City's Racially Concentrated Areas of Poverty (RCAP). Note the concentration of poverty in Ward 9. 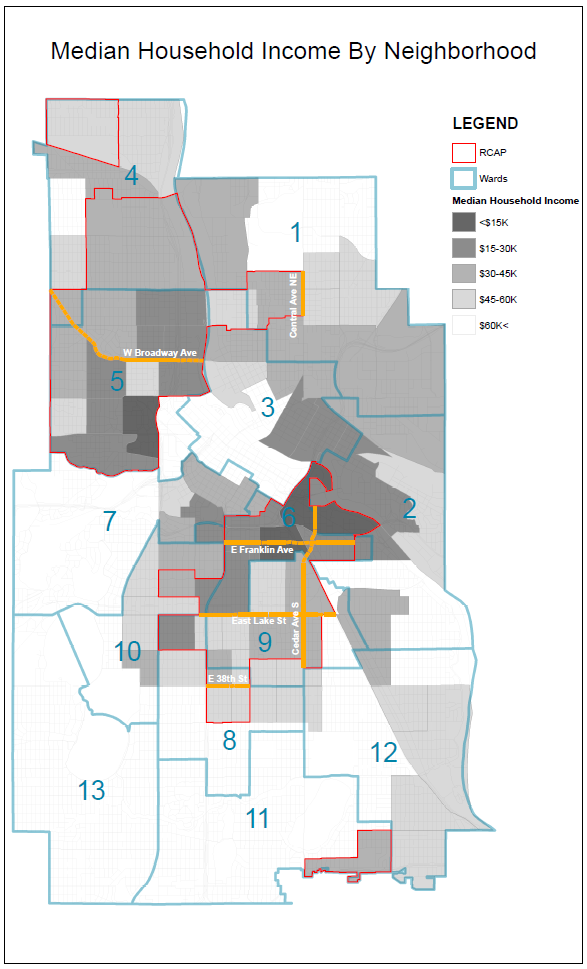